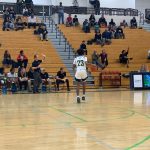 The 9th Grade team made a nice run in the season-ending county tournament by making a run to the semi-finals.  In the semi-final game the young Titans trailed 10-4 after one quarter but took a 20-18 halftime lead.  They led 31-24 after three quarters but ultimately Peachtree Ridge’s team staged a big comeback and won