Lilburn-On a brisk Fall night the visiting Discovery Titans relied on a strong running game to win a close ball game over their rivals the Berkmar Patriots 33-21. Both teams took advantage of some big plays to gain momentum as it swung back and forth until the final quarter. In the opening quarter, the Patriots took advantage of great field position after a Discovery punt to march 51 yards fueled by a 24 yard run by Patriots quarterback JerMahri Hill.  The touchdown was scored by Caylon Washington on a 3 yard jet sweep around the left end.  The quarter came to an end as the Titans had driven down inside the red zone and would score on the second play of the 2nd quarter on an 11 yard burst by JB Seay. The PAT was no good and the score stood 7-6 Patriots.  The Patriots next four drives in the first half ended in a turnover on downs, punt, turnover on downs and a fumble as the half neared an end.  The Titans would punt on their next two possessions but cashed in with under 2:00 left on a 3 yard run by Seay.  The Titans took a 14-7 lead into intermission after scoring a two point conversion on a pass to Nate Wilson from Rashad Ray. The Titans had a huge defensive stop with about two minutes left on 4th and 1  when the snap was bobbled and they had a huge group of players join in the tackle for loss.

The second half saw Berkmar use the big play again with a 37 yard completion to Washington from Hill on a tunnel screen followed by a 17 yard hookup for the touchdown to pull Berkmar within a point at 14-13.  The extra point hit the left upright and bounced wide left but one official said it was good so the score would be 14-14 with 9:02 left in the 3rd quarter.  The Titans rebounded with a 62 yard scoring drive punctuated by an 8 yard scoring run by quarterback Rashad Ray.  The PAT was good and the Titans led 21-14 with 4:13 left. Sophomore Jadon Wortham had a huge 38 yard run on 3rd down to put the Titans in position. The Patriots were forced to punt on the next possession and Discovery would march 66 yards led by big runs from Ray and Seay.  The touchdown came on a five yard punishing run by Seay to give him his third of the night.  The Titans PAT hit the same left upright and bounced left but it was called no good so the lead stood at 27-14 with 8:45 left in the game.  The Patriots would not go away and after picking up a couple first downs to move near midfield they hit a big scoring play of 50 yards from Hill to Dara Olonade.  The PAT was good and the score stood at 27-21 with 7:01 left.  The Titans took advantage of an unsportsmanlike penalty and a kick out of bounds to get the ball on their 38 yard line.  They went on a clock-eating drive that forced Berkmar to call their remaining timeouts. On 4th and 8 from the 17 yard line, Rashad Ray kept the ball and made a great run and punched the ball in for the 33-21 lead with 1:45 left in the game.  The Titans defensive line harassed Hill and came up with a few more big sacks and the Patriots turned the ball over on downs with the Titans needing to take a knee as the final seconds ticked off.

The Titans defense was led by 6 sacks.  Two from Ole Miss commit, JJ Hawkins and others from Christian Gray, Eduardo Trejo, Jabin Leake and Jovane Broomfield.  Offensively, the Titans rushing game accounted for a school record 294 yards and 5 touchdowns.

The Titans improve their overall record to 2-3 (1-0) and the Patriots drop to 0-3 (0-1).  Next week, the Titans are off and their next game is at home vs. Duluth.  Berkmar will host Duluth on Thursday. 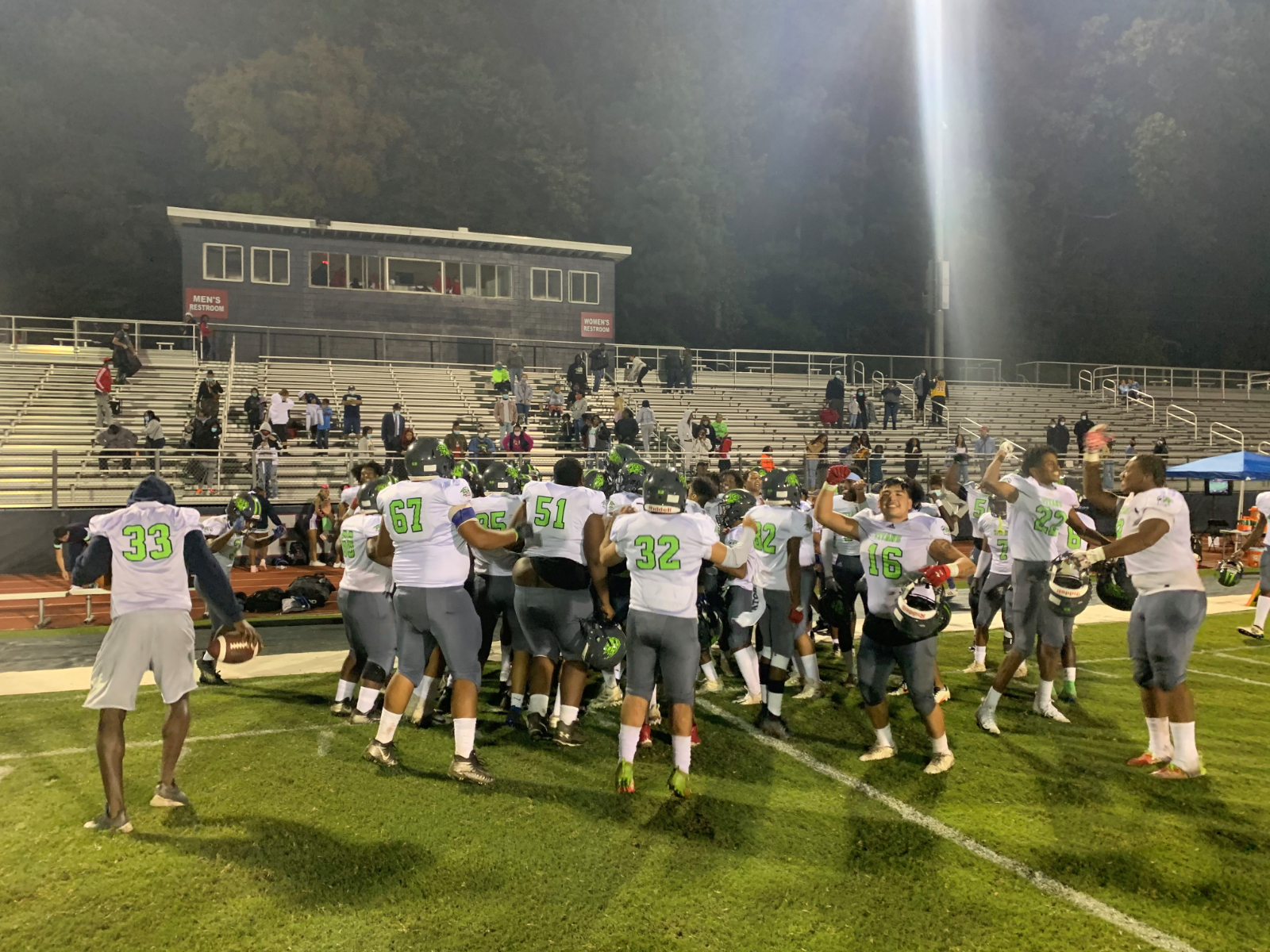