As an Athletics Director or during my time spent as a coach at Norcross one of the best moments of the year was attending Gwinnett County Public Schools Outstanding Senior Athlete Banquet.  It is so amazing to read about the talent that our county produces in every sport including several Olympians, Major League Baseball players, NBA players, WNBA stars, NFL All-Pro’s and so many other amazing young men and women student-athletes.  It’s a night where each school recognizes their top male and female as nominated by the coaches at that school so a literal who’s who of GCPS student-athletes.  I love reading the Gwinnett Daily Post and following some of these kids as they accomplish amazing feats and lead their respective teams to big wins or championships.  Most importantly though, the level at which they achieve academic prowess and will attend prestigious schools for academic and athletic excellence.  Simply put, I’m always amazed and proud to be an Athletic Director in Gwinnett County.  With that being said, I wanted to recognize our two athletes for this year’s banquet that should have taken place this week.  The coaches gave me a rough outline of their speeches and why they felt each student was worthy of this recognition. 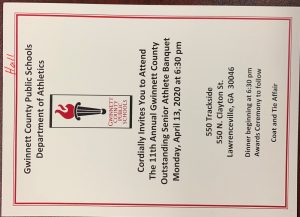 Payton Hicks is an exceptional example of what it means to be a student athlete. As an AP student with a 3.4 GPA, she works hard at balancing school, athletics and her personal life. Payton is the secretary state student ambassador, is involved in student council, and volunteers with the Gwinnett youth commission. As an athlete she has lettered in Varsity basketball as a freshman, sophomore and a junior. Sophomore year she also received the Coaches award for outstanding athlete, and was the Gwinnett County player of the month for December. Upon injuring her knee and tearing her ACL the summer before her senior year of high school, Payton has been working hard rehabbing daily and battling to get back on the court. This injury quickly forced her to become more of a vocal leader off the court for her team, and she spent this past season on the bench as the fifth assistant coach. She showed leadership by not letting her injury affect her as a teammate. Instead, she continued to coach the younger guards making sure they knew their roles in the offense and defense, acting as an extension of the coaching staff. Payton did not let her injury affect her work ethic or love for the game, and this lead to her accepting a basketball scholarship to play for Brenau University Women’s basketball in the fall.  Payton shows daily what it is like to lead by example and embodies what a true student athlete looks like, this is why we chose her to represent our Discovery Lady Titans basketball team as our Outstanding Senior athlete.- Head Women’s Basketball Coach- Kandra Bailey 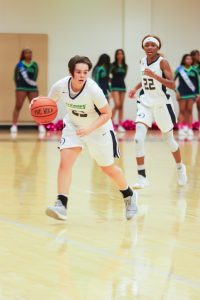 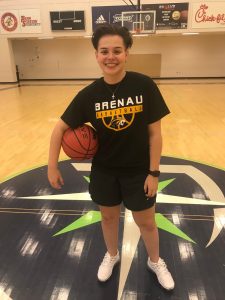 Meka’el Alcine was a force at Linebacker last season.  He finished the season with 115 tackles 2 sacks and 6 Forced fumbles.  All of those things are great but it was not the reason I nominated Meak’el.  As a football coach one of things that I ask of my players is to lead on and off the field.    Meak’el is what coaching is about to me.  We talk, encourage, spend time talking about life and we know some get it and some do not.  Without going into detail, one day Meak’el  put himself in harms way for the betterment of another student and stopped them from harming their self.  Being a leader is about serving, and this in my opinion is the greatest selfless act a young man could have taken.  I am proud of this young man for being a great football player but an even better person.  Proud of you Meek!!  Head Football Coach- Efrem Hill 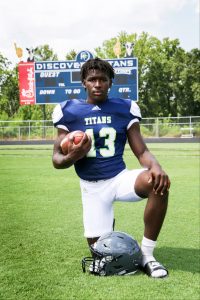 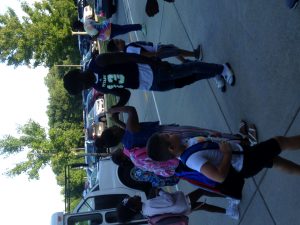