A hard-fought game on Friday resulted in a milestone victory for our girl’s basketball coach.  The Lady Titans won 36-35 after fighting their way back from being down nearly double-digits in the 3rd quarter.  Senior Akaya Chaney led the Lady Titans with 15 points and sophomore Taylor Watkins had 10.  The Lady Titans are off to the best start in school history at 10-2 overall and a 3-0 region record.  They came back on Saturday afternoon to beat a determined Milton squad 51-35 with Akaya Chaney leading them with 20 points.  Senior Jada Jamerson had 10 points and 8 rebounds and Janiece Long put up 9 points. Monday night vs. Central Gwinnett Akaya Chaney set a new school record by scoring 29 points to lead the Lady Titans.

Coach Bailey reaches the 100 win milestone in her 6th year as a head coach.  Her first 4 were spent as the head coach at Pearl-Cohn HS in Nashville, Tennessee before becoming the head coach at Discovery in 2018.  Her record at Pearl-Cohn was 80-24 with a state championship game appearance.  In her first season at Discovery, the Lady Titans set a new record for victories in a season with 12 and finished 12-13 overall. 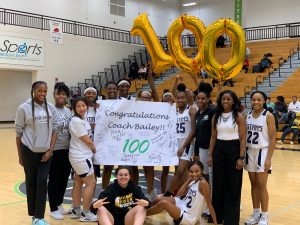 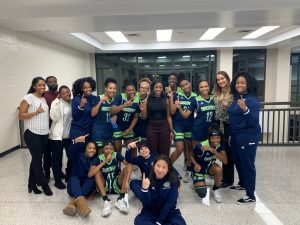 Celebrating at Home after the Central Game and a picture after the 100th victory at Duluth!

The Lady Titans are in action this week with a game  Friday vs. Mill Creek.