On Tuesday, Samford University Athletics announced their 6 Hall of Fame inductees for the class of 2020.  Head football coach, Efrem Hill was nominated to join the class.  They will be recognized at a home game on November 9th, and inducted later in April in a formal ceremony.  Congratulations to Coach Hill on the nomination!!!

EFREM HILL
CLASS OF 2020
Efrem Hill was one of the top receivers to ever play football at Samford. He had a breakout season as a junior in 2003, tallying 92 receptions for 1,387 yards. Following the 2003 season, he was named the Ohio Valley Conference Offensive Player of the Year and Male Athlete of the Year. He was also named a consensus All-American and was a finalist for the Walter Payton Award. During his senior season, Hill again led the team with 71 catches for 984, and was named first team All-OVC. He left school as the program’s all-time leader in receiving yards and still ranks in the top five in the category. After his senior season, he signed as an undrafted free agent with the Carolina Panthers. He spent time on the practice squads for the Panthers, Tampa Bay Buccaneers and Cleveland Browns. He later played in the CFL for the Edmonton Eskimos and Saskatchewan Roughriders. He also spent time with the Georgia Fire in the Professional Indoor Football League 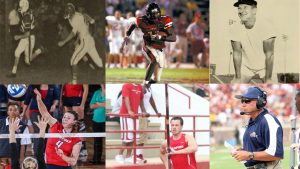